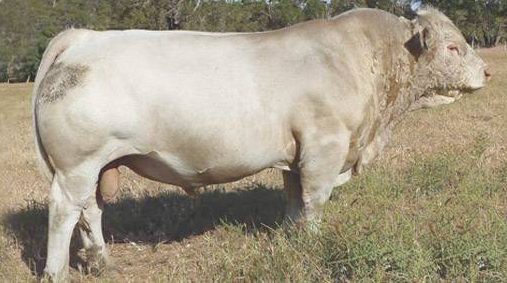 Article published by The Land, April 2019

Six-year-old stud sire, Venturon Hamish H6E, is by Venturon Crusty Demon C5E and from Venturon Eliza E8E, and was first sold by the Thompson family of Venturon Livestock, Boyup Brook, WA, back in 2014, before they decided to buy him back in 2016 for in herd use.

“We sold his (Hamish’s) sire to DSK Charolais as a seven-year-old. We loved what Crusty Demon did for us, and we wanted to continue that, so we bought Hamish back,” Venturon’s Harris Thompson said.

Interest in the bull was sparked from overseas when the Johnson family from Johnson Charolais, Canada, were chasing something new, and Mr Thompson suggested Hamish.

“I showed Stephen (Johnson) some pictures, and sent him a video, and he thought he was a good bull so decided to add him to their program,” he said. “Stephen liked the bull’s shape and carcass attributes. He’s got a whole heap of power but is still a moderate sire.”

Shortly after this, the United States semen rights were sold to the Kisner family of Wild Indian Acres, De Soto, Missouri, who saw a Facebook post of the bull.